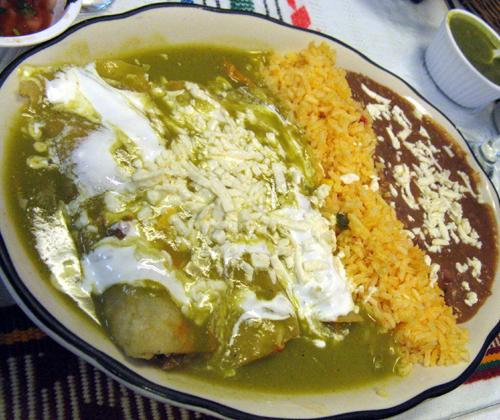 Literally, “Swiss Enchiladas,” this sweet tomatillo-based ‘green’ sauce and creamy toppings is a delicious variation on traditional red enchiladas. As the story goes (not sure if it’s entirely true… just what was told to me when living in Mexico), a Mexican chef wanted to impress his Swiss guest, so he made a creamier version of enchiladas, and thus “Enchiladas Suiza” was born. I recently made Marcela Valladolid’s version of enchiladas Suiza and it was so simple and delicious! By the way, I originally planned on doubling her recipe… but ended up quadrupling it. (Hooray for delicious leftovers!) The rotisserie chickens I bought at Costco had a lot of breast meat. But below is just a doubled-up version of Valladolid’s recipe.

I’m also playing around with making variations of refried beans out of canned pinto beans (bake your own beans if you’d like!), fat (bacon fat, butter or vegetable-based oil), and seasonings (cumin, chiles, onions, garlic, salt, etc). Below is a simple, butter, garlic and cumin version. Subtle and delicious. Other times I’ve added bacon crumbles or leftover turkey taco meat. When making refried beans, don’t be afraid to use all the liquid in the can. The beans may seem too runny at first, but they soon thicken up into a delicious side (or main!) dish.

Anyway, here are the two easy, healthful and (in my opinion!) delicious recipes.

(Update: I think I’ll be including some wilted spinach in my next version of the Enchiladas Suzia for flavor + nutrients!)

(Our daughter helping me peel tomatillos!) 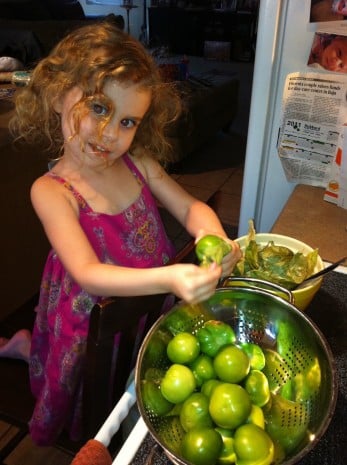